Daily Item
MUNCY — Maria Sanutti-Spencer has filed a notice of intent to file an appeal after a Columbia County jury convicted the 50-year-old Selinsgrove woman to life in prison on charges that include murdering her ex-husband and attempting to burn down a Danville residence. 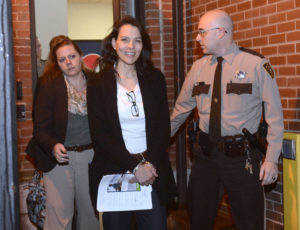 Sanutti-Spencer spoke out from the State Correctional Institution at Muncy about the murder of her ex-husband, Frank Spencer, 46, of Millville, and said she did not commit the crimes, but her father did.

State prosecutor Anthony Forray told a jury presiding over Sanutti-Spencer’s November murder trial that the victim was found July 3, 2012, shot once in the torso with a .30-caliber rifle and in the head and neck from close range with a .357 Magnum handgun.

State troopers contended Sanutti-Spencer, a 126-pound, 5-foot, 4-inch tall woman and kidney transplant recipient, either sat in a tree stand about 100 yards away from the Millville home she frequently shared with Spencer or walked up behind him, shot him and left him for dead.

Sanutti-Spencer then dragged her ex-husband’s 275-pound bleeding frame into the home and closed the door, according to testimony.

Sanutti-Spencer said she knows state prosecutors wanted her father for the murder and only arrested her as a decoy to bring Franklin back to the country.

“My dad didn’t kill Frank because of me, so he has no intention of coming back to save me,” she said. “My dad is not that kind of dad. He has never done anything for me. Not ever. My dad not returning to save me is only a shock to Mr. Forray.”

She is convinced she was convicted only because her last name is legally Sanutti. Anthony “Rocco” Franklin’s previous surname was Sanutti.

“It bothers me when people tell me my dad was Anthony Sanutti,” she said. “It bothers me more because he is my dad. I was accused, arrested and convicted because I am the daughter of a career criminal. It makes me think about all the times I told my children that you are judged by the friends you hang around with.”

Sanutti-Spencer was also found guilty of arson when the jury believed she attempted to burn down the home of Spencer’s girlfriend, Julie Dent, of Danville, in 2010.

Dent testified that one night in August 2010 she went to bed around 9 and awoke to the sound of smashing glass. When she went to see what the noise was, a fireball shot upstairs at her.

Dent crawled out of a window, and scaled down to safety. Police believe Sanutti-Spencer and Franklin were responsible.

“Everyone said I did this and that I was jealous of her (Dent) and I planned this,” Sanutti-Spencer said.

“The truth is I was not at all jealous and Frank (Spencer) and I both dated other people. I was not jealous of her at all.”

Sanutti-Spencer fired her attorney Christian Hoey, of Philadelphia, and has now hired Justin McShane, of Harrisburg, to handle her case.

Sanutti-Spencer said she was not happy with the representation she received and was confused why Hoey didn’t challenge many rulings during pre-trial conferences.

Sanutti-Spencer had 36 witnesses lined up but only her family and ex-boyfriend were allowed to testify.

“I was not allowed to defend myself,” she said.

“I am now hoping to get a new trial and with the help of my new attorney I will be able to get the truth out.”

This is a condensed version of a two-part published interview that can be found on www.dailyitem.com.