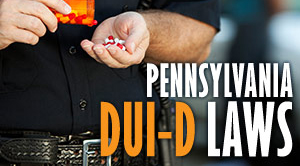 Being accused of Driving Under the Influence of Drugs – or DUI-D as it’s known here in Pennsylvania – means you’re facing some very serious penalties.

DUI-D cases are a very specialized type of DUI case, with laws and penalties all their own. The experienced DUI-D lawyers of The McShane Firm are highly-trained to deal with these special type of DUI cases.

The State of Pennsylvania uses a “per se” law when charging DUI-D cases, meaning if any amount of any drug on a specific list is found in your system at the time of your arrest, you’ll face charges under the State’s Highest Impairment tier, which carries the most serious penalties.

Worse: these High Impairment laws apply regardless of the legality of drug in your system. Everything from illicit substances to harmless prescription and over-the-counter drugs may fall under the per se rules.

Given this wide range of DUI-D criteria, the penalties for DUI-D conviction are surprisingly narrow and severe.

DUI cases involving drugs are automatically charged at the state’s Highest Impairment tier, meaning they are subject to the harshest penalties for DUI in Pennsylvania. The following are the penalties for a DUI-D conviction in PA:

A DUI-D conviction will be noted on your permanent, public criminal record – meaning any potential employer, landlord, loan officer, or nosy neighbor who wants to probe into your past can see your DUI-D conviction. And since that conviction never goes away, it can often complicate job applications and insurance rates far into your future.

As you can see, a DUI-D conviction really can change your life – and not for the better. Which is why it is so important to fight back by hiring an aggressive DUI attorney with specific experience in DUI-D cases like yours.

How The McShane Firm Can Help You Fight Back

Each DUI-D case is different, including yours. Everyone expels drugs from their system at a different rate, so you can be considered under the influence of drugs legally and/or accidentally even if the drugs in question are over-the-counter or prescription medication. But try actually proving that to the court by yourself.

Your blood sample at the time of arrest could also have been contaminated. There have been countless cases where Isopropyl is accidentally mingled with blood and alters the results, but how would you ever know or prove that on your own?

Similarly, police officers may have violated the State’s search and seizure and/or reasonable suspicion laws when they pulled you over. But chances are, you wouldn’t know it. And if you did, how could you get the court to believe you?

The McShane Firm can help. Our attorneys are highly-trained in the nuances of DUI-D cases, and we employ some of the foremost DUI-D specialists in Pennsylvania in the courtroom. Our superior knowledge of forensic science and aggressive courtroom style sets us apart from all other DUI-D lawyers. With The McShane Firm at your side, you can feel confident that every possibility will be explored in your case in order to fully protect your rights.