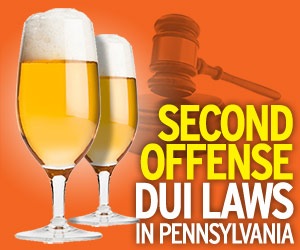 If you’ve been accused of DUI in Pennsylvania and you have a prior DUI conviction on your record, you already know that this time around, you’re facing stiffer penalties, including mandatory jail time, license suspension, and thousands of dollars in fines.

Let’s take a look at the laws and penalties of a Second Offense DUI in Pennsylvania.

The specific consequences you face for a Second Offense DUI conviction will be based on your Blood Alcohol Concentration (or BAC) – the amount of alcohol that was present in your bloodstream when you were arrested. The higher the BAC, the higher the penalties you will face.

The Commonwealth of Pennsylvania defines three tiers of impairment based on your BAC:

Other Important Things to Know

With a Second Offense DUI, the stakes are higher. That’s why it’s crucial to have an experienced, aggressive DUI lawyer in your corner to fight for your license, your rights, and your freedom.