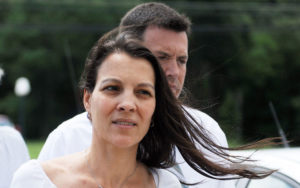 MUNCY — Maria Sanutti-Spencer spends up to 16 hours a day in her cell at the State Correctional Institution at Muncy following her November murder conviction, biding her time with hopes she will be granted a new trial.

Sanutti-Spencer, 50, of Selinsgrove, continues to review court documents after she fired Christian Hoey, her attorney during the nearly two-week trial, and now meets with her new legal team as she seeks a new and “fair” trial, she said during an exclusive interview with The Daily Item.

Sanutti-Spencer was convicted of gunning down her ex-husband, Frank Spencer, 46, of Millville, in July 2012. She was found guilty by a Columbia County jury and sentenced to life in prison.

Sanutti-Spencer said she was prepared for the worst on Day 2 of her trial.

“I knew I was going to be found guilty,” she said. “There were 36 witnesses scheduled to appear on my behalf and only my mom, sister and boyfriend were allowed. They were also told they could not talk about my kidney failure and heart failure at the time of (Spencer’s) death.”

Sanutti-Spencer, who said she almost dismissed Hoey during her trial, has retained Harrisburg attorney Justin McShane to represent her in her appeal.

“I have had many requests from various attorneys to help me,” she said. “I am not doing any of this for the media attention or to see my name in a newspaper. I did not kill my ex-husband and I cannot sit behind bars for a crime I did not commit.”

Sanutti-Spencer sent a letter of intent to file her appeal. McShane now faces the task of giving the courts detailed reasons about why she should be granted a new trial.

Among those reasons: Sanutti-Spencer said she believes the judge who presided at her trial was biased.

Senior Judge Michael Dunlavey, of Erie County, often clashed with Hoey when the Philadelphia attorney tried to include Sanutti-Spencer’s medical records as evidence.

At one point Dunlavey misspoke during instructions to the deliberating jury — he explained to the panel to remember the facts of the case that included Maria Sanutti-Spencer killing Frank Spencer on July 1, 2012.

Hoey immediately pleaded for a mistrial.

Sanutti-Spencer turned to three family friends and said, “That’s it. It’s over. I will be found guilty.”

A short time later, 12 jurors made it official.

The appeal, she said, could include how police in Hemlock Township, Columbia County, apparently did not believe Spencer, who had told anyone and everyone that his ex-wife was going to kill him.

In fact, he filed a report with the Columbia County district attorney’s office saying Sanutti-Spencer and her ex-husband were using the legal system in order to gain the upper hand in a custody battle.

Sanutti-Spencer and her ex-husband had been ordered by the court to avoid each other, yet they continued to live together, Traugh testified. Traugh even drove by the Millville home and saw the couple together, but never made any arrests.

While she works on her appeal, Sanutti-Spencer said she intends to focus on waking in a positive mood every day.

Sanutti-Spencer gets her meals delivered to her in her cell and is allowed outside to exercise a few hours a day, she said.

“I am doing the best I can in this situation,” she said. “It is not easy, and it is not easy when people look at you and assume you are guilty. Many of the people in here (prison) who even attempt to talk to me believe I am in the mafia and I committed these crimes. It is very sad to hear and to watch. I feel awful for my two children who have to read about their mother and see their mother on television painted in this sort of bad light. Because it is not true.”

Sanutti-Spencer suffers from medical conditions that include diabetes, short-term memory loss and vision problems. Inside her cell, she reads, works on her case, and rarely watches television.

“I am in the process of getting a job,” she said.

Sanutti-Spencer said she is working with the prison on finding a job inside its walls even though institution officials believe she is at risk because of her health conditions.

“Just because I am sick doesn’t mean I can’t work,” she said. “Plenty of people who need insulin work on a daily basis.”

Sanutti-Spencer visits with her family weekly and said she has received interview requests from major news outlets and various crime shows.

“I have no desire to be one of those people who is looking to see my face out there,” she said.

“I decided to speak because I wanted my hometown to know that I am not this monster I have been made out to be. I want people to hear the truth before they judge me. All I want is a fair trial. One in which is not held in an area where my ex-husband was a legend and a friend to all. The funny part of that is if you would have asked Frank, he’d have told you he had many so-called friends, but in reality, he didn’t have any friends.”

According to court documents McShane has until Wednesday to file detailed reasons for the appeal.