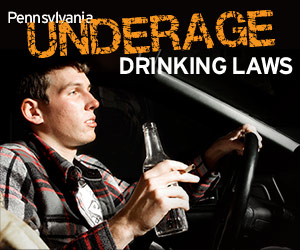 The minute you were pulled over, you probably knew you were in trouble. Not only is driving while under the influence of alcohol or controlled substances against the law in PA, so is drinking alcohol while you’re under 21. Now you’re accused of doing both. So you’re probably wondering what kind of penalties you can expect to face if you’re convicted.

The first thing you should know is that any driver under the age of 21 who is arrested for DUI in Pennsylvania is automatically charged under the State’s High BAC tier. Even if this is your first offense, even if the amount of alcohol in your system is minimal, your punishment is probably going to be more on the maximum side.

How bad can it get?

Look at it this way: the minimum penalties at the High Impairment tier include at least two days (and up to 6 months) in jail, a fine of at least $500 (possibly as much as $5000) and a suspended license for 12 months – meaning you won’t be driving again for a year.

And it gets worse. You might already know that drivers under 25 – even those with clean records – pay a lot more for auto insurance than older drivers. Well, add a DUI conviction and your rates will go through the roof – if you can even get auto insurance at all.

Finally, just like in school, your underage DUI conviction will be noted on your permanent, public criminal record – meaning it will be visible to potential landlords, employers, college admissions departments, and anyone who might want to run a background check on you. And it will never, ever go away.

If you’ve been accused of underage DUI, you are facing some very serious trouble. Which is why now is the time to take action and do whatever you can to protect your future. You do that by hiring the best, most experienced DUI attorney you can find.

Do I have to tell my parents?

That depends. If you are over 18, you’re protected under something called “attorney-client privilege,” which means your lawyer can’t say anything to your parents unless you agree. However, if you’re under 18, you’ll need a parent or guardian to sign your lawyer’s contract. But chances are they’ll be more than willing to help you avoid the consequences of DUI conviction and help you protect your future.