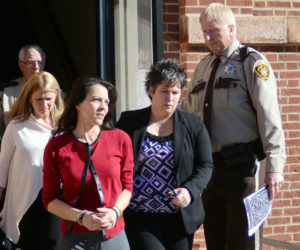 Now, the mother of two, convicted in November of murdering her ex-husband, Frank Spencer, 46, of Millville, on July 1, 2012, says she cannot accept life in prison just because she is the daughter of a self-proclaimed mafia hitman.

In an exclusive interview with The Daily Item from inside the State Correctional Institution at Muncy, the 50-year-old Selinsgrove resident said she was forced to sit and listen to the ghostly testimony of her ex-husband — whose friends and relatives swore, under oath during her trial, that he had predicted his own murder at the hands of his wife.

Sanutti-Spencer has since filed a notice of appeal and has fired her high-profile attorney, Christian Hoey, of Philadelphia, because, she says, he was unable to get her story into the courtroom.

Sanutti-Spencer spoke out because she wanted to let her friends and family know what she says is the truth about why she was unable to defend herself against the murder charges.

“I got a life sentence for the misfortune of having a dad who is a sociopath and career criminal who got mad at my ex-husband,” Sanutti-Spencer said, “and killed him.”

State prosecutor Anthony Forray told the jury that Spencer was found July 3, 2012, shot once in the torso with a .30-caliber rifle and in the head and neck from close range with a .357 Magnum handgun.

State troopers contended Sanutti-Spencer, a 126-pound, 5-foot, 5-inch-tall woman and kidney transplant recipient, either sat in a tree stand about 100 yards away from the Millville home she frequently shared with Spencer or walked up behind him, shot him and left him for dead.

Sanutti-Spencer then dragged her ex-husband’s 275-pound bleeding frame into the home and closed the door, according to testimony.

The problem with that theory, Sanutti-Spencer said, was she couldn’t pull the trigger because she wasn’t strong enough, given her diabetes.

Sanutti-Spencer said she wasn’t anywhere near Spencer’s house the day of the shooting, but instead at her mother’s home in Selinsgrove, planning to spend the day with her boyfriend and son.

Sanutti-Spencer said she believes her father was involved.

“I didn’t ask my dad to kill him or hurt him in any way,” she said. “More importantly, I didn’t want Frank Spencer to die and leave me or my children.”

Dressed in chocolate-brown, state-issued prison attire, Sanutti-Spencer readily admits she has a temper, a vocabulary rife with blue language and that she and her ex-husband had a volatile relationship.

What she won’t admit, what she says she will never admit, is that she conspired with a man she calls her father in name only — Anthony “Rocco” Franklin — in the execution of Spencer that July day.

“Franklin is only to blame”

Then the 73-year-old Harrisburg resident left her to take the rap for Spencer’s shooting death and, she said, leave her alone in a cell for the rest of her life.

Franklin was also charged in gunning down Spencer.

But he fled to Argentina, where he was found in September 2014, jailed and has been fighting extradition since.

Sanutti-Spencer said she knows state prosecutors wanted her father for the murder and only arrested her as a decoy to bring Franklin back to the country.

“My dad didn’t kill Frank because of me, so he has no intention of coming back to save me,” she said. “My dad is not that kind of dad. He has never done anything for me. Not ever. My dad not returning to save me is only a shock to Mr. Forray.”

She is convinced she was convicted only because her last name is legally Sanutti. Anthony “Rocco” Franklin’s previous surname was Sanutti.

“It bothers me when people tell me my dad was Anthony Sanutti,” she said. “It bothers me more because he is my dad. I was accused, arrested and convicted because I am the daughter of a career criminal. It makes me think about all the times I told my children that you are judged by the friends you hang around with.”

Sanutti-Spencer said she believes her father and another person stalked Spencer and waited to kill him.

“He lied to me when he wanted to get out of jail in the first place,” Sanutti-Spencer said of Franklin.

“He needed a home plan and he had said Frank said it was OK for him to live with us.”

Sanutti-Spencer and Franklin spoke in July 2014 when Franklin left an office in Harrisburg after testifying to a grand jury, she said.

“He told me they were going to find something on him and he would be held on a probation violation,” she said. “He said he wasn’t going to die in jail so he was leaving.”

Franklin fled the United States that night and has never spoken another word to his daughter, she said.

“That was the last time I spoke to him and I had no idea where he went,” she said.

“We figured it would be far, far out of the country, but I had no idea where he was until I saw they (Argentine police) caught him.”

Sanutti-Spencer spoke to the grand jury and maintained her innocence and, after her July 2014 arrest, said she was offered a plea deal by prosecutors but declined because she was “not guilty.”

“I immediately said no. Not because I would have to testify against my dad, but because I was not going to plead guilty to murder or any other charge because I did not do these things they said I did,” Sanutti-Spencer said.

Her attorney told prosecutors he wouldn’t accept a deal because he had a witness who would testify he was hired to kill Spencer.

“I told my attorney I was not guilty of these things and I had evidence to prove it,” Sanutti-Spencer said. “I trusted in what he said and I trusted in the legal system.”

Hoey confirmed he was no longer representing Sanutti-Spencer and declined comment for this story.

In April 2007, Franklin — while serving a sentence on a drug conviction — asked a fellow inmate at the Federal Correctional Institution at Schuylkill, John Ulrich, of Columbia County, to do him a favor once he was released, according to court documents.

“Take care of the problem,” Franklin suggested to Ulrich after they spoke about Spencer, according to court documents.

Responded Franklin: “No, I want him gone,” according to authorities.

Ulrich later told Columbia County police that he believed Franklin was gauging his interest in committing murder. He told police he did not know Spencer, would never participate in such an act, and that he did not think it right for anyone to kill another, according to court documents.

During his daughter’s trial, Franklin called The Daily Item and said he was also innocent of the charges against him.

“Of course he did,” Sanutti-Spencer said. “He was not going to call and be the savior of the day for me. He is not going to come back here and tell the truth.”

“Lost trust and in a cast”

Sanutti-Spencer said she gave advice to Hoey throughout the trial and explained several details of the case, but because he rarely met with her, he was always steps behind the prosecution, she said.

“I would have to try and outline things for him and then we would have zero time to go over it,” she said. “There were so many things that were brought up during the trial that were taken out of context. There were text messages that were read, but the conversation that went with them were not read. They used things against me that were intended to be used out of context. They also would listen to my phone calls to my family and they would base their case off of what I was saying.”

Sanutti-Spencer said she lost that trust quickly in Hoey and knew on Day 2 of her nearly two-week trial that she was going to be convicted.

She said she almost stood up during the trial and told the judge she was going to fire Hoey.

“I was not allowed to bring up evidence,” she said.

“When they say I did these things what they didn’t tell the jury was I was in a cast.”

Days before the trial started, Dunlavey ruled Sanutti-Spencer would not be allowed to include evidence her ex-husband had been part of an investigation into dealing drugs or that he was physically abusive. The judge also ruled Sanutti-Spencer’s medical records would also not be entered as evidence because they were not relevant to the case.

Sanutti-Spencer said she was not allowed to tell the jury she injured her foot while riding on a motorcycle just days before the July 1 murder of Spencer outside his Millville home.

Sanutti-Spencer was placed in a cast and was “not very mobile,” she said.

While Forray and police continued to hammer the point Sanutti-Spencer was responsible for the murder, she said she was not allowed to tell jurors of her medical issues.

Sanutti-Spencer listened to hours of testimony that included voice messages attempting to depict her as a scorned woman who bragged her father was in the mafia — and was waiting for the right moment to strike and kill her ex-husband because he betrayed his daughter and fell in love with someone else.

People she said she barely knew were calling her the “black widow,” referring to her two late husbands. Sanutti-Spencer was married previously and her ex-husband had died of ongoing health issues, she said.

Sanutti-Spencer said she chose not to testify on her own behalf because she had already decided she would be found guilty and wanted to wait until she was able to get a second trial.

One thing Sanutti-Spencer wants the public to know is that she was not jealous of her ex-husband dating, she said.

“Everyone says I was this scorned woman who was so obsessed with Frank but that just simply wasn’t the case.”

Sanutti-Spencer cried when she spoke about Spencer and the times they shared while married. She also speaks about her new attorney, Justin McShane, of Harrisburg, and how she is making the best of her prison life while hoping she is granted a new trial.